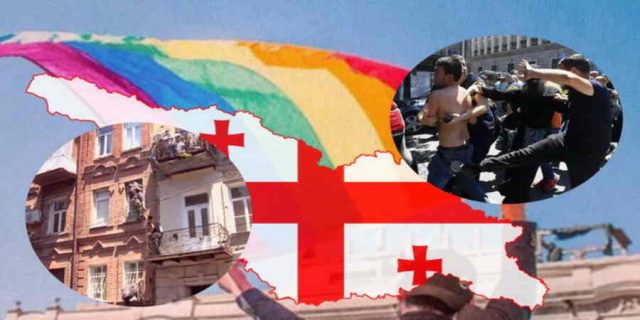 Georgia once again found itself in the spotlight of the international media. The events that unfolded in Tbilisi on July 5 are most often searched for on a Google search as – “Tbilisi Pride was cancelled amidst violent protests”.

”LGBT activists in Georgia have cancelled a gay rights event after their office was stormed by far-right protesters.  Journalists and activists were also attacked ahead of the planned march in the capital Tbilisi. At least 20 journalists were reportedly injured in the violence, while an LGBT rainbow flag was burned in the street,” the BBC writes. The publication also quotes Tbilisi Pride as saying that the protest will not be held due to violent protests, as “they will not put human lives at risk in a street full of abusers.”

“While discrimination against sexual orientation is illegal in Georgia, the country – which lies between Eastern Europe and Western Asia – remains very conservative,”  the BBC article states.

The British edition The Guardian also responded to the events in Tbilisi on July 5.

“Video and photographs showed anti-gay protesters scaling a three-storey building to break into the headquarters of the Tbilisi Pride march in the Georgian capital, while elsewhere men with long beards in priests’ clothing punched and kicked journalists. One journalist said he was beaten with a stick while others reported having their cameras and other equipment broke. Irakli Garibashvili, the prime minister, on Monday appeared to claim the Pride organizers had provoked the violence, saying it was “unreasonable” to hold the demonstration in a public place that could lead to “civil confrontation”. Meanwhile, a member of parliament accused the “radical opposition” of sponsoring the pride events,” –  The Guardian reported. The publication writes that holding a pride in Georgia is always followed by contractions and violent protests.

Aljazeera writes that “while authorities had promised to protect the marchers on Monday, prominent community leaders and Georgian Prime Minister Irakli Garibashvili had spoken out against the rally.  According to the country’s Prime Minister, the Pride contained the threat of civil strife.  He warned the event risked creating “civil confrontation” and accused opposition politician and former Georgian President Mikheil Saakashvili and his opposition United National Movement (UNM) party of organizing the march in a bid to sow “unrest” in the country”.  The article also provides information on recent events related to the Tbilisi Pride Parade. In the article subsection “Failure of the State”Aljazeera writes “But the country remains deeply conservative, with the powerful Orthodox Church having clashed with previous Western-leaning governments over social issues.”

Deutsche Welle  also responds to the developments around the Tbilisi Pride.

“The Orthodox Church had called on supporters to take part in a public prayer against the LGBTQ celebration.After a spate of attacks, including the ransacking of the offices belonging to the organizers and a motorcyclist driving into the crowd, the march had to be canceled.Protesters, including Orthodox priests, also targeted journalists. Photos circulating on Twitter showed journalist Rati Tsvevara reportedly being dragged around by a priest after being beaten and harassed”, –  DW notes.

The Washington Post also draws attention to the fact that violent groups also attacked a Polish tourist, which made his hospitalization necessary.

Bloomberg writes that the Ministry of Internal Affairs of Georgia, which called on he Interior Ministry, which had called on Tbilisi Pride not to hold its march because of the threats, said in a statement it was investigating the attack on the group’s offices. The Public Defender of Georgia also condemned the incident.”

The published articles mention that the embassies of different countries and the representatives of the European Union in Georgia also responded to the events in Tbilisi and condemned the incident.

The German audience liked the anti-LGBT action of the Georgians, which was broadcast live by the Russian RT.

The German-language edition of the Russia Today broadcast a live stream from Tbilisi against the anti-LGBT action. According to the comments made on YouTube, most of the German viewers liked this action.

„ So, sollte es auf der ganzen Welt sein – So it should be all over the world”.

This must be a happy and healthy people. I almost have tears in my eyes. With my forty years here in Western Europe I have not even seen that boys and girls dance with each other so. And in addition so various  and good-looking. The West is completely degenerate.”

Basically, such comments are made by German viewers, who still learn the truth about Georgia from the Russian media, while  the German Public Broadcaster in its report directly ground down  the Georgian “aggressors”.

The U.S. Embassy fired the principal of a Georgian school.

Criticism of the U.S. Embassy is punishable, as is speaking out against and preventing debauchery parades. This has already happened to one of the participants in the July 5 rally, who is now awaiting trial; however, not only is waving fists punishable, a single sentence written on Facebook is enough to punish – as was done with Zurab Kareli, the principal of the fifth public school in Gori!

Zurab Kareli wrote the famous Georgian expression – “Better watch out for your own harlot!” as a comment under the statement of the U.S. Embassy and other “democratic” embassies. Because of this, he was forced to write a statement and resign from public service. The Ministry of Education considered the expression “obscene”. However, the Georgian man protested against the U.S. and European embassies’ interference in Georgia’s internal affairs and support for LGBT debauchery.

Bondo Mdzinarashvili: I’ve been saying this for years and because of this the brainless liberals declared me a fascist, a homophobe and a “Kremlinist”!

Bondo Mdzinarashvili, a member of the Board of the Public Broadcaster, spreads the message in the social network:

Gubaz Sanikidze said it right – the sun of liberalism in Georgia has set! Yes, the time of educated conservatism and nationalism will return very soon! And not only in Georgia! It will definitely happen! It has already happened!

I’ve been saying this for years, and because of this the brainless liberals have declared me a fascist, a homophobe and a “Kremlebot”!

Analyze well July 5 and 6 and you will see that conservatism and nationalism in Georgia will not give way to liberalism! People have been patient for a long time!

Irma Beglarishvili: They hold a parade and call it a march of dignity; the trouble is that they make you recognize their “superiority”.

This is a case where the word has no power, but I will say it anyway:

It’s not the gays who parade and call it a march of dignity; the trouble is that they make you recognize their “superiority”.

Who gives the right to this parade, why not ask the question: for what merit?

Is it possible to respect the demonstration of one’s buttocks?

Or, tell me, when you look at them, do you feel sympathy for them?

Don’t you realize that all these years we have been challenged and ridiculed?

It’s one thing that we’re a common colony. That’s why they do what they want through the government they put in charge.

It was Christ who destroyed and trashed the market stalls set up in front of the church. The Orthodox flag was flying over the Georgian soldiers when they went to war! The war is still going on today. As soon as you lower your defenses, tomorrow they will corrupt your children and grandchildren, as this will inevitably become the norm. Yes, it is a war, a war that is more dangerous and merciless than a battle with the sword.

Well,  who of  them looks like a human being. The masses who have lost face, who are ready to blame anything and everything in exchange for money. . .

Isn’t that why Sodom and Gomorrah were wiped out in the dust?