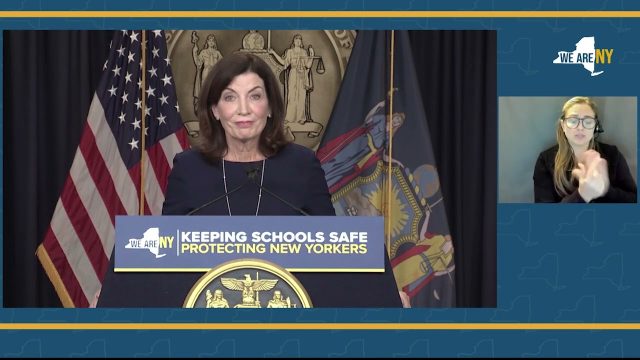 She said the state is “still digesting” the ruling.

“Somehow there are no restrictions allowed on the Second Amendment,” Hochul said. “This is New York. We don’t back down. We fight back.”

“I’m sorry this dark day has come. That we’re supposed to go back to what was in place since 1788 when the Constitution of United States America was ratified. And I would like to point out to the Supreme Court justices that the only weapons at that time were muskets. I’m prepared to go back to muskets,” she said.

We just received some very disturbing news from Washington; that the Supreme Court of the United States of America has stripped away the state of New York’s right and responsibility to protect its citizens with a decision – which we are still digesting – which is frightful in its scope of how they are setting back this nation and our ability to protect our citizens back to the days of our founding fathers. And the language we’re reading is shocking.

As Governor of the State of New York, my number one priority is to keep New Yorkers safe, but today the Supreme Court is sending us backwards in our efforts to protect families and prevent gun violence. And it’s particularly painful that this came down at this moment. We are still dealing with families in pain from mass shootings that have occurred; the loss of life of their beloved children and grandchildren.

Today, the Supreme Court struck down a New York law that limits who can carry concealed weapons. Does everyone understand what a concealed weapon means? That you have no forewarning that someone can hide a weapon on them and go into our subways, go into our grocery stores like stores up in Buffalo, New York, where I’m from, go into a school in Parkland or Uvalde.

This could place millions of New Yorkers in harm’s way. And this is at a time when we’re still mourning the loss of lives, as I just mentioned. This decision, isn’t just reckless, it’s reprehensible. It’s not what New Yorkers want. We should have the right of determination of what we want to do in terms of our gun laws in our state.

If the federal government will not have sweeping laws to protect us, then our states and our governors have a moral responsibility to do what we can and have laws that protect our citizens because of what is going on – the insanity of the gun culture that has now possessed everyone all the way up to even to the Supreme Court.

The law we’re talking about has been in place since the early 1900s. And now to have our ability to determine who is eligible for a concealed carry permit – this is not an ordinary permit. This is a special use that you can hide it from people. We have limitations, if it’s for a proper cause, someone who’s been threatened, someone who needs it for their job as a security guard. We have classifications where it is allowed and has been allowed for over a hundred years.

We do not need people entering our subways, our restaurants, our movie theaters with concealed weapons. We don’t need more guns on our streets. We’re already dealing with a major gun violence crisis. We don’t need to add more fuel to this fire.

But I will tell New Yorkers, we’ve been ready for this. We feared this day would come and it came. At this very moment when we are about to sign a law into place, the origins of which was a loss of a 14 year old child, Alyssa, in her school.

The confluence of these two events is shocking. But again, I’m going to reassure this state. We are reading the language as we speak. We’ve been preparing, but we have been working with a team of experts, legal experts from all over this country and organizations like Everytown, true leaders, to make sure that we are prepared.

I’m prepared to call the legislature back into session to deal with this. We’ve been in contact with the leadership. We’re just looking at dates. Everyone wants a little bit of time to digest this, but I will say we are not powerless in this situation. We’re not going to cede our rights that easily. Despite the best efforts of the politicized Supreme Court of the United States of America, we have the power of the pen.

And I just want to read some language here. Apparently, the Supreme Court has now decided with this far reaching decision that the two step standard that had been in place since Heller [and] McDonald, where they analyze the Second Amendment, where it combines history. We have a history, yes we do, but also means and scrutiny. Does the means of the restriction justify the infringement.

And most people would say, yes, we have a right to protect people from gun violence. But I’ll simply say in our very quick analysis because this is only minutes old, they have now said that the government must demonstrate that the regulation is consistent with this nation’s historical tradition of firearm regulation.

That’s it. No longer can we strike the balance. Only if a firearm regulation is consistent with this nation’s historical tradition may a court conclude that the individual’s conduct falls outside the Second Amendment’s unqualified command.

Shocking, absolutely shocking that they have taken away our right to have reasonable restrictions. We can have restrictions on speech. You can’t yell fire in a crowded theater, but somehow there’s no restrictions allowed on the second amendment.

This is New York. We don’t back down, we fight back. And we’ll be alerting the public, the media in the very short term of exactly what our language is that we’ve been analyzing. We have language we’d like to now enact into law. We’ll be sharing that with the leaders.

And I’m sorry this dark day has come. That we’re supposed to go back to what was in place since 1788 when the Constitution of United States America was ratified. And I would like to point out to the Supreme Court justices that the only weapons at that time were muskets. I’m prepared to go back to muskets.

I don’t think they envision the high capacity assault weapon magazines intended for battlefields as being covered from this, but I guess we’re just going to have to disagree.