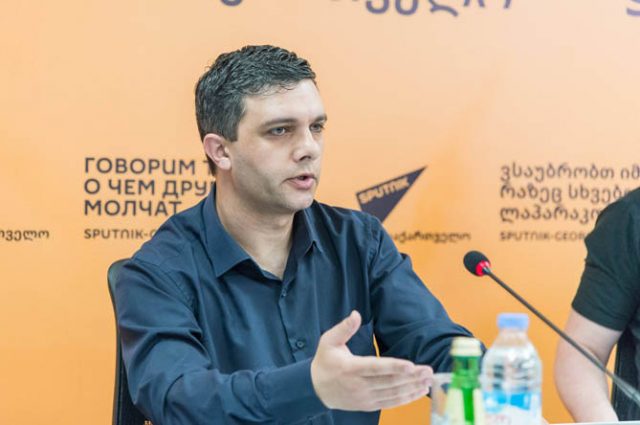 Russian Foreign Ministry spokeswoman Maria Zakharova has accused Washington and Kiev of working on biological and chemical weapons in Ukraine. Zakharova said the Russian military destroyed components needed for biological weapons in Ukrainian laboratories on February 24. In addition, the spokesman for the Russian Foreign Ministry once again mentioned the Lugar Biolaboratory in Georgia.

“We talked about this in 2020, we expressed concern about the US military-biological activity in the post-Soviet space. We made a lot of statements about biolaboratories operating in Georgia and other countries of the post-Soviet space. Most of the questions were related to the activities of the Lugar Research Center built by the US Department of Defense, the conversation is directly related to Georgia. Medical examinations of the US and Georgian ground forces were conducted there” – Zakharova said.

A few days before Zakharova’s speech, Lieutenant General Igor Kirilov, the head of the Russian Armed Forces’ Radiation, Chemical and Biological Protection Forces, said that the so-called African swine fever, which has been circulating since 2007, was received in a laboratory in Georgia.

“We believe that this strain, which is characterized by increased contagiousness, was constructed in a Georgian laboratory under the Pentagon. Its spread has caused significant economic losses to a number of countries, including Ukraine and Poland, which have been excluded from the ranks of pork exporters” – says Lieutenant General Igor Kirilov, head of the Russian Armed Forces’ Radiation, Chemical and Biological Protection Forces.

Will Russia take Georgia in target  because of the  Lugar laboratory? – Giorgi Iremadze, the Chairman of the Young Eurasian Union of Georgia  talks about these and other important topics:

-, To make it easier for readers to understand what we are dealing with, let’s explain when the idea of ​​building a Lugar Laboratory began. According to official information disseminated in the Georgian media, in 2003  an agreement was reached between the Georgian and US Ministries of Defense  on cooperation in the field of technology and pathogens related to the development of biological weapons and the non-dissemination of information in this field. Subsequently, this agreement defined cooperation between the two countries in this field and in 2011 a Public Health Research Center was established near Tbilisi International Airport. The American side, according to various sources, has spent $ 350 million to build the center. The center was named after U.S. Republican Sen. Richard Lugar, who played a key role in its creation. The opening of the biolaboratory was celebrated with great solemnity by the current President of Georgia Mikheil Saakashvili and the operation of the facility was held in a closed environment from the public. Lugar’s laboratory was subordinated to Vano Merabishvili, first as Minister of Internal Affairs and then as Prime Minister. According to reports, no Georgian scientists entered the laboratory until 2013, and it is still unknown to the general public what researches were  conducted there.

At the end of 2012, when the Georgian Dream came to power, the issue of closing the Lugar Laboratory was on the agenda, but on May 7, 2013, by Government Decree # 422-e, the Richard Lugar National Public Health Center was closed and its property transferred to the Levan Sakvarelidze Public Health Center. The National Center for Disease Control, which was established as a separate structure in the Ministry of Labour, Health, and Social Affairs of Georgia. This is official information.

I have been researching the Lugar Laboratory for a long time, dedicating a number of articles and interviews to it, and in 2018 I also made a documentary that shows in detail the dangers of a US-controlled biolaboratory for Georgia. The film stars American journalist Jeffrey Silverman, who spoke in detail about Americans secretly producing dangerous viruses for biological weapons in Lugar lab

– Today,  , when the war between Russia and Ukraine is going on, Georgia has become, so to speak, one of the targets, and this is happening because of the Lugar lab. Russian officials mention bio-laboratories in Georgia and Ukraine, although a similar laboratory is located in Armenia. . . Why only we are mentioned to this end?

– I can not agree with you that Georgia has become a target against the background of the ongoing Russian military special operation in Ukraine. I do not think so. You are probably referring to the statement of Russian General Igor Kirilov that in 2007 a well-known virus called “African swine fever” was created in the American biolaboratory operating in Georgia  under the auspices of the Pentagon, which affected both Ukraine and Russia. I do not think that after this statement, as you said, we will become a target, it is far from reality. Igor Kirilov at that briefing mainly spoke about Ukraine. According to him, the Americans are using Ukraine as a production facility for viruses and biological weapons, i.e. the main topic was Ukraine and not Georgia.

– Maria Zakharova also spoke about the Georgian biolaboratory.  The Russian side says that many dangerous viruses have been created in the laboratory in Georgia. Is this true? Is it possible to do this in our lab?

– It is understandable why Russia is emphasizing threats. They are well aware that the Americans have long been building biolaboratories along the Russian border in post-Soviet countries, and are working on viruses, or, in fact, the production of biological weapons. The Russians have such data, and their concern is probably not unfounded, as many outside Russia are talking about similar facts. In Europe, for example, numerous documentaries have been made detailing the activities of Americans in the field of biolaboratories. This topic was talked about in my film by American journalist Jeffrey Silverman. He is a very competent journalist and heads the Georgian branch of the well-known American publication – Veterans Today.

In addition, even American officials speak openly about this issue. For example, a few days ago, US Deputy Secretary of State Victoria Nuland confirmed that Americans have biological research facilities in Ukraine. It should be noted that Lugar-like biolaboratories, such as those in Georgia and Ukraine, are banned in the United States because there is an international agreement that prohibits conducting dangerous experiments on viruses. The Americans are using Ukraine and Georgia as an experimental territory for the production of biological weapons, which will be directed against Russia. It is precisely because of these factors that similar statements are being made from Moscow, and this is a rather serious matter.

When a state is threatened by a neighboring state, in this case the biological one, which is provoked by a third country, is of course dangerous. Georgia should not use our territory to the United States to produce biological weapons here in the form of dangerous viruses. The current government of Georgia is in the right position in the sense that it has not joined the anti-Russian sanctions. This is, first of all, in the interests of our country. Thank God we do not interfere in the processes in Ukraine, but the issue of Lugar Laboratory is a serious topic and, if today there are really dangerous experiments on viruses, it is necessary to control and prevent such activities.

– As it is known, Russia connects the launch of a special operation in Ukraine, among other reasons, with the work of American biolaboratories there.

One of the factors was the existence of American biolaboratories in Ukraine, as the US uses them as biological weapons. Therefore, I think that the Georgian government should take control of Lugar’s laboratory and not allow the Americans to carry out dangerous experiments there and pose a threat to the region. This is not allowed. I hope the government does everything to eliminate the risks.