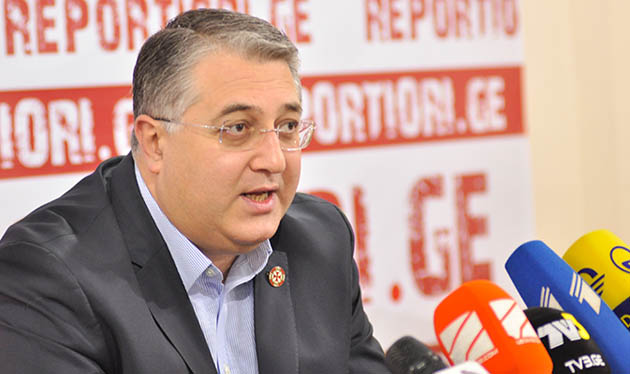 After the United National Movement, along with various  foreign-funded LGBT organizations and 15 pro-Western parties signing a memorandum of understanding, failed to use the tragedy of “TV Pirveli” cameraman Alexander Lashkarava  to stir up unrest in the country, and did not receive desired support from the West  (which became especially clear after the arrival of Charles Michel), its four party TVs – “Ristavi 2”, TV Pirveli”, “Mtavari” and “Formula” transited to 24-hour mode of political sabotage. Microphone-camera provocateurs called journalists, repeatedly arranged provocation and shows, including during  plenary sessions in the Parliament, in front of the government office,  ministries, courtrooms, church services, dioceses, etc.

The public, as well as the church, has so far tolerated these actions, including the provocative threats of the crucifixion of St. Nino on July 5 in front of the parliament (this threat has been heard several times on social networks); Also the government and personally the Prime Minister Irakli Gharibashvili, who, like other high-ranking officials, has been targeted by LGBT-liberals since July 5, but despite the passing of time, provocations are becoming more frequent and even more rude …

What is the purpose of the recent actions of “TV Pirveli”, “Rustavi 2”, “Formula” and “Mtavari” and who or what forces are behind them?  Journalist and media policy expert Giorgi Akhvlediani  talks with “Georgia and the World” about these and other important issues.

– Mr. Giorgi, recently four liberal TVs “TV Pirveli”, “Rustavi 2”, “Formula” and “Mtavari”   are trying to provoke tension and unrest in the country, which is reflected in the fact that they are following the Prime Minister, the Speaker of the Parliament, the ministers, the clergy,  etc. What is the purpose of these actions, what do these people really want?

– First of all, we should probably say that this unheard of violence, bullying and madness, what the “national televisions” are doing now, has nothing to do with journalism. This is not journalism and no one in this country, especially the younger generation of pupils and students who are going to be journalists in the future, should not think that real media should work like this. Those people,  especially young people, who have now appeared on this aggressive wing, not journalism, do not know how to hold a microphone. If you observe how they hold the microphone, you will realize that they are not even close to real journalism. I am not saying anything about not knowing how to ask an elementary question; They do not know how to interview and so on. They know only one thing: fulfilling the tasks given to them by politicized producers, which in this case is to create a “scandal” out of nothing, to make noise and to organize a circus. . . They do not even try to record interviews, but rather exclude respondents. Maybe someone’s nerves will shatter, maybe someone will be “accused” of accusing a journalist of violence and then tell a story about it. That is their task. So they go for all sorts of inconsistencies that have nothing to do with real, objective journalism.

– Social networks are already discussing whether they are journalists at all and whether we should mention them as media representatives . . .

To my surprise, the older generation is also involved in this psychosis, and I can not really say that they are not journalists, but the younger generation, children under 20, who behave shamefully, I repeat, have nothing to do with the media and journalism. These, in my opinion, are Zonder-activists of the “National Movement”, who were allowed on their televisions and branded as journalists. In this way, they try to get inviolability and the media mantle hides in a clear way to organize provocations. The result is also obvious. The result is that if, for example, an ordinary Zonder-activist provokes something, he can be beaten d and a person will be fined 400 GEL for beating him, but if a similar provocation is organized by a microphone provocateur and you touch him, you will be imprisoned for 4 or 6 years. . . If someone shouts at the Prime Minister and puts a microphone in his mouth, can you imagine how far it has come? “When will you resign?” He repeated aggressively. . . This is not a question, this is a normal provocation. . .

– What should the society or the government oppose to all this?

– First of all, all this needs to be exposed in the sense that it is not journalism and is a normal partisan activity. Serious, influential media organizations should be found in Georgia and abroad, to which we should address and ask them to observe the actions of these people for at least a few days. Otherwise, we simply will not be able to, and even more so, we will not be able to make a change in the law that forbids a journalist from asking an idiotic question . . .

-, What will the monitoring of media organizations change?

– This, at least, will have a serious impact, in what sense, you know? If anyone in Georgia still has an idea that wow, what cool things they are doing, these ideas will eventually crumble. If Gvaramia is told, for example, that no, sir, your hysterical jump on the podium and the convulsions are not journalism, they will be seriously embarrassed. In any case, they can not continue this madness so freely and I am sure that the same Risches and Kinzingers  will not be able to escape from there, – O, They are  abusing free media in Georgia. So they will understand step by step that the media masquerades held by them have no meaning . . .

– Do the provocations organized by them make sense today? Does it work on any segment of the community?

– Probably yes, and I do not see any surprise in this, propaganda will always work for some part, but when the whole civilized world, the most authoritative media organizations tell you – what you are doing is madness, you will be left with two ways – or you should stop this madness and return to normal mode, or  admit that you like madness. In both cases, everything will be called by its name and the society, which already understands everything well, will see black and white even more clearly.

– You mentioned Senator Risch, today in the West, and especially in the high political echelons of America, there are subjects who guard any political diversion of the “National Movement” with their teeth. These people put constant pressure on the government, sometimes threatening sanctions, sometimes cutting funding, and so on. Is the current government ready to withstand this pressure?

– In this case it is not an ideological problem. This is a financially motivated context from beginning to end, which has always been seen and still seems very clear today . . .

–  Are you saying that the Nationals pay these people money for their support and criticism of the government?

-I am sure. By the way, in my time when I was an MP and reading the budget, I could clearly see that the government and specifically the Security Council, which was then headed by Giga Bokeria, started year with 2 million  and finished with 25. On our question, where this money came from, I was told that when it was initially 2 million, we were told: it is secret information. Of course, we realized that this money came from various foundations, including the President’s Fund, and was used to pay the royalties of these Risches, Shahins Brisas or Kinzinger . . .  That was the reality and then these funded people called Saakashvili a beacon or a beacon of democracy. Obviously, this practice continues today and will continue in the future, so I, if you ask me, should not pay attention if any financially interested senator jumps out and absolutely unfoundedly, unjustifiably criticizes the government. These people will not find Georgia on the map, nor do you care what is happening here.

– Not so long ago, their influence turned out to be enough to release  the authorities from prison, including the parliament attacker Melia, Okruashvili,  and   Ugulava, embezzler of 52 GEL  from the budget.

– It was really a weakness of this government, but today I would like the government to stand on its own two feet, the signs of this are already on the part of Gharibashvili and, not to endure all this, to break the destructive forces. This may be the only guarantee that the country will win and win the madness called the “National Movement” with its media-zonders . Otherwise, they will not stop and continue to harm and destabilize on a larger scale  . . .