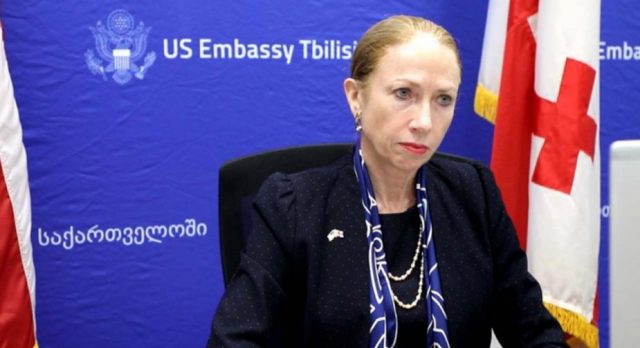 The withdrawal of the Georgian Dream from the April 19 Agreement caused a great deal of agitation. Of course, the opposition said the ruling team had no hope of gaining 43% support in the election and therefore canceled the deal. The leaders of the “Dream” said that they were tired of playing games with the “National Movement” and left the Agreement.

Indeed, despite the fact that the United National Movement entered parliament and even started working in the legislature, it did not sign the Agreement, the reason is simple – they were convinced that the “Dream” would get 43% of the votes in the local elections and then they would state: We did not sign the document and still demand early parliamentary elections. The Nationals know best that they will never have the opportunity to return to power through elections, so they should do their best to call extraordinary elections controlled by international pressure, which is often the beginning of the process of handing over power. The revolutionary charge could not be stirred and the only way is through international pressure. So, Giga Bokeria said: the government is afraid of only two things – international influence and large numbers of people taking to the streets, there is an impact and now we have to take to the streets, but…

The government has been criticized several times by US Ambassador Kelly Degnan for rejecting the April 19 Agreement. She calls on the “Dream” to return to the negotiating table and fulfill the commitments set out in the Charles Michel document. “Every statement made by Georgia’s friendly countries, including us, shows how disappointed we are with the decision of the Georgian Dream to leave the Agreement. This was the best guide, the result of 6 months of negotiations on the reforms that Georgia needs to implement. The main value of the Agreement was the joint negotiation of the parties to implement reforms. We hope that the Agreement will become the main structural framework for the parties to work together. Unilateral reforms are not enough, Georgia needs multi-party reforms. We hope that the Agreement will remain in force and will continue to serve as a guide that is so important,” -this is Degnan’s latest statement on ongoing processes.

It is clear from this that Ms. Kelly holds the government accountable and does not even mention that the National Movement did not sign the document, ie the main opposition force had no obligation to implement the document. At the same time, Degnan hinted that the decisions should be multi-party, ie a coalition government should be formed. We have written many times and we will repeat it again – the coalition government did not work in any state; Moreover, after the formation of coalition governments, a political crisis began in all states, which ended with early elections. This is what Degnan leads to and this is how she wants to call early elections in Georgia, otherwise she knows very well that overcoming the 43% threshold is not a problem for “Dream”. We know well to what this act of throwing stones by the US ambassador in the vegetable garden of the governing power serves. She also said: If all possibilities are exhausted, we will discuss sanctions. Is this an ordinary American official threatening the government? Of course it is.

The Georgian Dream has once again tried to break the yoke of Western slavery, and this is exactly what the “strategic partners” could not stand. That is why, the European parliamentarians or ambassadors were to arrive in Georgia on charter flights, concerned about the disrespect of Charles Michel and the rejection of the document. We still believe that the government understood what we were writing so far – the West was basing its positions on this document; In fact, this document did not have any useful point or article for us, which, for example, would make life easier for the population, move the economy forward. It was a set of new laws that would allow the West to trigger a political crisis at any moment and turn everything in its favor.

The West did not react when Mikheil Saakashvili from Kiev insisted that sacrifices were needed, that someone should die, so they could build everything on it. Unfortunately, the cameraman died, but the opposition could not build its own plans on the death of Lekso Lashkarava. And here is the second tragic case, which is very doubtful as it coincided with the the withdrawal of the ruling team from the April 19 Agreement. There have been calls that Georgia is a dangerous country, that coming here is life-threatening, and that opposition started arguing about the rise in crime. Before we move on to the main pathos of crime and the opposition, here are a few statistics:

This is the number of murders per 100,000 inhabitants. This is the situation today gentlemen, and what comes out? Sweden, Finland, Germany, Belgium are more dangerous countries than Georgia … Lithuania is five times more dangerous … Lithuania, which thinks that it can teach us without appeal, and which the West owes us to listen, and tells us that we should look like this Baltic country.

It was easy to guess that the death of a foreign citizen would have an international resonance. Now that Europe is covering the news in the region, the main topic is the disaster in Turkey and the murder of an Australian teacher in Georgia. The goal has been achieved, Georgia has been negatively covered in the international arena and the whole opposition spectrum (with a few exceptions), non-governmental organizations, the liberal wing and everyone is shouting in unison: the government must leave because it cannot protect us. The opposition will make a call very soon: to take to the streets to demand the resignation of the government, and the opposition channels have already made this a major topic. So what, if at the Tokyo Olympics, Georgian athletes are close to the historical result and show the world that the children of a small nation can be the first, but this is good news and good news should not be covered. Nino Salukvadze was also insulted on social networks – why did she appear at the Olympics, she could not bet on the result. However, CNN responded to Salukvadze’s participation in the Ninth Olympics on the one hand, and the legendary athletes – on the other hand – saying that she is an amazing woman.

Death trade has become one of the rules of the political game. How not to draw a parallel with the assassination of Giorgi Sanaia, who was well used by the then opposition National Movement and came to power. It is easy to follow the “beaten track” and now they are trying to do the same, so we say, or rather, we demand that the Ministry of Internal Affairs should arrest the offender as soon as possible and prove that the murder took place either on the ordinary ground or in someone’s interests. With the help of modern technology, many things can be found out today and tomorrow, so it should not be delayed, especially when one of the opposition channels said on Sunday morning that the dead woman’s body was “injured and tortured.” This is when information about neither injuries nor torture was spread. The same TV station said: it is also to be found out whether there was a single or several offenders. On Sunday morning, it was not clear whether there was any violence. It is clear from these statements that the murder will be turned upside down, aggravated, taken to the international arena, “dragged from wall to wall” on the social network, but the country, the country in which they live, will be disgraced, ashamed, despised …

What happened is very bad, but in no way does it mean that crime is flourishing in our country. Even in developed countries we are ahead of this figure and we have not heard anyone say about any of the above countries – it is dangerous to travel there. However, the difference between Georgia and those countries is that they do not demand the resignation of the government because of one murder, therefore, the Ministry of Internal Affairs must investigate the case very soon and silence both the West and the locals.