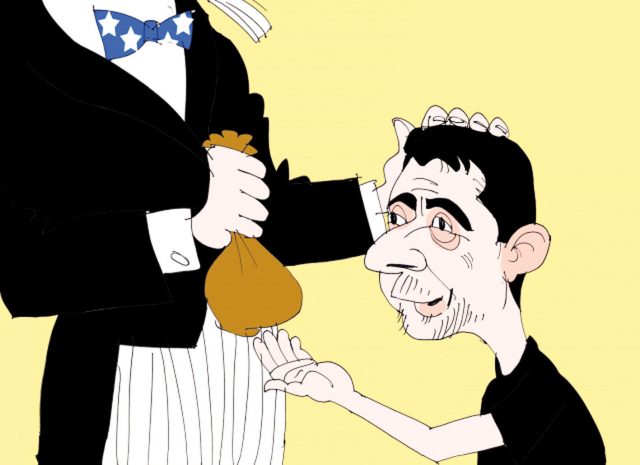 The next NATO summit is over and our expectations have been met – as a result of this summit Georgia received a very big … nothing. Yes, nothing, but unlike the previous nothing, we received too big nothing this time. Of course, the authorities tried to embellish this nothing, tried and applauded the fact that NATO funding is declining – on the pretext that they withdrew troops from Afghanistan and funding is declining because the money is being spent rationally in the Alliance. What does this have to do with Georgia? It’s nothing to do with it, gentlemen, but they had to say something about the nothing that has been publicly granted to us and they said this useless phrase.

Instead, the opposition leaders came down with grim faces, Saakashvili from Kiev also got involved and said – during my presidency, the US President mentioned Georgia at least once a week, and now Georgia has disappeared from the world map. Opposition leaders have solemnly sworn in, we will use personal connections, we will do everything we can to make the West mention Georgia more often. It is not ruled out that we will even appoint a monthly salary to any MEP or senator, just to mention Georgia. Well, this idea is not bad at all, the budget filled with our money keeps so many idlers and how can it not bear one senator?!

By the way, Ukraine got a bigger nothing. In any case, Ukraine is much bigger than Georgia, it is the largest state in Europe and therefore its nothing appeared bigger than ours. Ukrainian President Vladimir Zelensky hoped that the issue of Ukraine’s integration into NATO would be on the agenda of the Biden-Putin meeting, but after the meeting the Russian president cut short: “As for the issue of Ukraine’s possible accession to NATO, we have touched this issue briefly and there’s nothing to be discussed here …” by this statement Vladimir Putin confirmed that neither the United States nor Russia would take the issue seriously, and, most importantly, Biden did not speak out on the issue.

It is noteworthy that no one asked about Georgia, and this is when Georgian politicians were creating expectations, the main discussed topic would be Georgia, Biden would scold Putin and say that Georgia would soon become a member of NATO one … In fact, Biden did not and will never remember Georgia, unless Georgia is a good reason to manipulate with Russia. Georgia is in the condition of a stick that it is used to dig into the ashes to ignite the died down fire, and alas, today this stick is in the hands of the West and does not even think of letting it go. What’s worse is that this stick itself also tries its best not to get away from the hand, which, for 30 years now, has only been rolling it in the ashes and playing with fire. All this is very similar to the Georgian fairy tale “Natsarkekia”, but unlike the fairy tale, the giant, or the West, is sitting on the neck of Natsarkekia and is not going to come down.

And yet, what did we expect from the summit, at which we were simply not invited, they just avoided spending money. What if someone from Georgia came and became popular? They are not going to grant a MAP to us, it became clear when Misha was waiting and finally they gave him something “better than the MAP”. The Nationals got a grip on that “better than the MAP” (nothing more was left out) and left the same legacy to the “Dream”.

Although the West, in practice, makes us feel on a daily basis that Georgia will not be able to join NATO, and that EU membership in the next decade is unthinkable, Georgia’s political elite is still focusing on the West. Is this a self-deception? You will be surprised, no, because Georgian politicians know exactly that they have a chance to stay in power through such an action, they even manage to distribute the grants from the West the way they like and, most importantly, they think that if they do not do that, they will lose voters. In fact, voters are already laughing heartily when they hear promises about NATO from the United States and talk about the prospects of joining the European Union from Europe. Voters are tired of endless promises, people have realized that the West is false, that everything is a lie, that we will go to the circle longer than the followers of Moses, but the thing is that the grants do not go to the voters and therefore they say out loud what they think unlike the politicians.

Pushing a country with an economy similar to Georgia is the easiest thing for the West. If the EU and the US want, we will not have any foreign debt in a month, the investment boom will start, the Georgian Lari will strengthen and the population will have more trust in Western institutions, but it will cost about 20 billion and why should they pay so much when they can easily transfer 40-50 million dollars a year as grants, do not control, know that politicians eat and were quiet ?! Besides, a greedy person has more time to think about other things, and in this case it will be the foreign course of the country. What do you think is the current foreign course of the country? In our opinion, the country simply does not have it – Georgian politicians do what the West dictates.

Do you realize the level of stupidity, gentlemen ?! Ukraine has a disputed territory with Russia, is practically involved in the war, and the accession of this country to NATO means that the North Atlantic Alliance is starting a war with Russia. The West will not allow this at the expense of either Ukraine or any other country. This was said by the American senators, but when they saw frustration in the eyes of Ukrainian politicians, they immediately corrected it saying- we will solve everything soon. I can not say when it will be “soon” for Ukraine, but in Georgia, it is already 30 years, we hear “soon”. We mention Ukraine with Georgia so often because these two “cases” have been united by the West and it has become one. Unfortunately for us, all this points to the only thing – neither NATO nor the European Union will stand by a laggard country like Georgia, in the literal sense of the word, an enslaved and beggar country. The UK, which has fled the EU, makes no secret of the fact that it wasted time by being in the EU. However, it is simply impossible to compare the budget and economy of Georgia with the budget and economy of Great Britain. The EU showed its true face most when Greece ran into financial problems and they threw this ancient country into a situation that could not be rectified for at least half a century. This is Greece, where Georgians go to work, that is, they are much ahead of Georgia, they have a much richer and stronger economy. Can you imagine what satiation Georgia will be thrown into if they need so?! One might ask: What could be worse than that? Trust us, we will long for the 1990s. A “strategic partner” and a “friend” can do this and will use this opportunity whenever needed.

Before that, let’s wait for the next NATO summit, in the winter – the Davos Forum, in the summer … No, we have no time in the summer, we are resting … Western leaders will gather again, discuss some topics again, and may or may not mention us again in a few words. Why in a few words? Because, they don’t care much about our country. This has been the situation already 30 years, but we do not want to open our eyes. Yes, make woolen socks for Biden and send them to him, the man is in old age and his feet should not get cold. We shall take care of his feet, not to let those feet freeze, on which we are hanging!