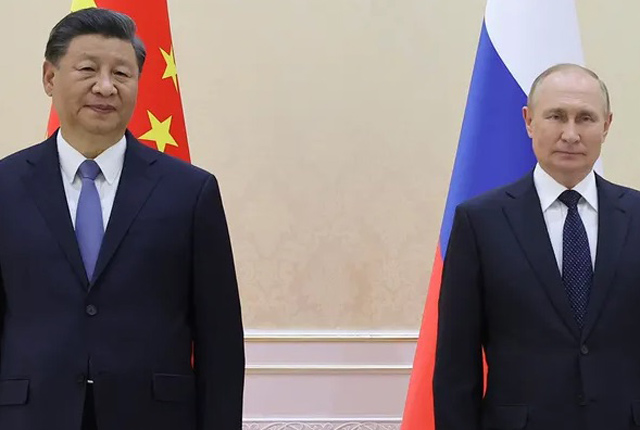 Russia and China have ‘masterminded’ strategies to destabilize US society

Vladimir Putin and Xi Jinping met Thursday in Uzbekistan during the Summit of the Shanghai Cooperation Organization, a sort of Asian version of NATO. Amid devastating setbacks on the battlefield, the Russian president prioritized the trip to see his Chinese counterpart in a meeting the Kremlin described as “quite a significant nature, for obvious reasons.”

The rendezvous follows a seven-day joint strategic war-game, “Vostok-2022,” in which Russia and China practiced aviation and naval drills in the Sea of Japan and Sea of Okhotsk.

Individually, these countries, both of whom the Pentagon has designated as America’s near-peer competitors, present a formidable threat to the homeland. In combination, the threat multiplies.

Here are five reasons why the Russia-China strategic tandem poses an existential threat to the U.S.

1. Both regimes have masterminded long-range strategies to destabilize American society through espionage, covert influence operations, subversion and election interference. Whether it is Confucius Institutes indoctrinating American students or deep cover agents infiltrated by Russian intelligence to the U.S., these threats are hard to detect and neutralize in a democratic society. These operatives steal U.S. secrets, cultivate access to influential persons, and infiltrate business, political, and activist groups, with the goal of fomenting discord and transforming America into an undemocratic authoritarian state.

2. Russia and China developed doctrines that seek to defeat America on the battlefield, should Washington intervene in a regional conflict, such as the war in Ukraine or a potential attack against Taiwan. However, if Moscow and Beijing synchronize the timing of their combat operations, they could pose a significant risk of two-theater war scenario. Officially, the Pentagon’s “two-war doctrine” is designed to deal with such a threat. However, concerns about the depletion of U.S. weapons supplies as a result of expanding shipments to Ukraine, coupled with Washington’s chaotic withdrawal from Afghanistan, casts doubt on U.S. forces’ combat readiness to fight in two theaters simultaneously.

Russia and China may even step in to help each other in a conflict if either faces defeat by NATO. They have been practicing joint combat drills since 2005. Most recent ly, “Vostok-2022” simulated a Russia-China “joint special operation,” responding to the perceived threat from Japan, South Korea,and the U.S. Such joint military planning augments interoperability between the two militaries.

Nuclear warfare is a potential component of Moscow and Beijing’s battle plan. Russia’s post-Cold War doctrine no longer views nuclear weapons as psychological deterrent to avert a catastrophic conflict, but rather as a battlefield capability that Moscow is prepared to use to stave off U.S. intervention in a regional crisis or defeat by NATO forces. Russia already holds advantage over the U.S. in tactical nuclear weapons. China is pursuing the largest ever nuclear force expansion in its history, while the U.S. ICBM force is in need of modernization, not being able to counter new missile defense technologies.

3. Both adversaries have identified America’s reliance on technology as a critical vulnerability to be exploited. Both have developed cyber-attack and space warfare doctrines and weapons to degrade or destroy U.S. military and civilian networks. Critical U.S. infrastructure, from banking and transportation to hospitals and nuclear plants, are vulnerable to attacks. Having realized the problem, the Pentagon is holding classified deliberations regarding the threat of China and Russia’s space weapons.

4. The Russia-China accelerating economic cooperation is boosted by their forecasts that the center of gravity in international commerce and investment is moving to Asia. The two nations have already set up a method to make bilateral transactions in rubles or yuan instead of euros or dollars, bypassing the Western SWIFT system. Plans are underway to integrate China’s Belt & Road Initiative with Russia’s Eurasian Economic Union. This trend plays into China’s long-range goal of replacing the dollar with Chinese yuan as the preferred international reserves currency. Other authoritarian regimes, which seek to decouple business from human rights, will likely favor an international transactions alternative.

In the meantime, China is providing a critical economic lifeline to Russia which is hit by stringent Western sanctions. China’s trade with Russia and Moscow’s energy exports to Beijing are surging. The massive joint $55-billion pipeline, the Power of Siberia, already sends Russian gas to parts of China and will become fully operational in 2025. With these new revenue streams, Russia may decide not re-open Nord Stream, the main natural gas pipeline to Europe, which Moscow recently shut down.

5. To be clear, Russia and China are not natural allies. They share a tumultuous history full of border disputes, cultural prejudices, and suspicions. However, they are united by a common cause, having aligned their aggressive policies to diminish America’s role in the world and promote an authoritarian system of governance. Moreover, Putin and Xi enjoy a comfortable relationship. While not exactly friends, they see eye to eye on many issues, having adopted a pragmatic and non-confrontational approach to dealing with each other. They project mutually while being engaged in a raw pursuit of national interests and the survivability of their regimes.

What makes this strategic tandem more dangerous is that both men have clearly laid out their anti-U.S. strategic ambitions. Putin seeks to rebuild a USSR-like alliance in Eurasia. Xi is implementing the century-old “China Dream” concept of economic prosperity and military strength. In line with it, Xi is taking China along the “Road to Rejuvenation” to turn it into the dominant global power, supplanting the U.S. by 2049, the centennial anniversary of the founding of the People’s Republic of China.

Both men have a sense of urgency to accomplish their goals, securing their legacies. Xi is 69 and Putin is turning 70 in October, with the former being in power for almost a decade and the latter for two decades. Each likely sees an opportunity to assert his own and his country’s power today. Putin is willing to gamble more, especially now that he could be facing defeat in Ukraine, and accept higher risk now, for more gain in the future. Xi, who has been reluctant to employ military means to achieve his goals, could rationalize doing so because of the perception that Washington is unprepared to handle two wars simultaneously.

The growing alliance of two nuclear-armed U.S. enemies, both ambitious for their countries’ futures and one potentially becoming desperate for survival, presents great peril for the homeland.