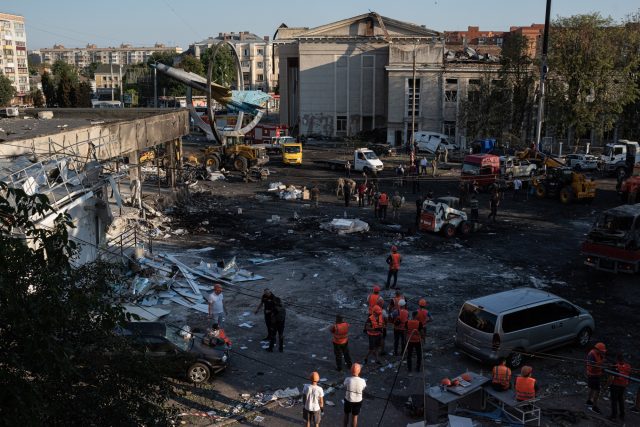 •Bulk of emergency loans remains stuck over details of packages

•Commission warns of risk of economic fatigue among Europeans

By Jorge Valero and Alberto Nardelli

The European Union is falling behind on its high-profile promises to deliver a substantial aid package to Ukraine at the same time the bloc is confronting the prospect of severe economic pain at home.

It was nearly two months ago when European Commission President Ursula von der Leyen proposed sending 9 billion euros ($9 billion) in emergency loans to Ukraine. So far, the bloc has only managed to agree on an initial tranche that covers a ninth of that target.

Heading into the traditionally sleepy summer period in Brussels, the EU will face new challenges as the specter of a total cut-off from Russian gas and the tightening of monetary policy risks pushing the region into a second recession in two years.

For Ukraine, the needs are urgent. The war-torn nation faces a budgetary gap of $5 billion per month to cover expenses and other urgent bills as it tries to fend off Russia’s attacks. Ukraine’s central bank remains the biggest source for financing the government’s budget and increasingly is raising alarms about the limits of its ability to provide cash through sovereign debt.

“We hope we can convince all the partners that Ukraine really needs these funds and we will receive macrofinancial assistance by the end of the year,” Ukrainian Finance Minister Serhiy Marchenko said in a statement.

The European Commission also committed in May to finance the bulk of the reconstruction of the country, which could amount to $750 billion, according to Ukrainian government estimates. That could prove an even thornier debate for the EU as there’s no agreement over how to raise the funds. The commission’s offer scared some member states, wary of the massive effort required to rebuild the country and potential corruption issues, people familiar with the discussion said.

The impact of the war’s economic consequences is weighing on EU governments as they begin to worry about the risk of waning popular support for Kyiv in the coming months, particularly if energy becomes scarcer and pricier.

When EU finance ministers discussed Ukraine aid at a meeting Tuesday, around a third of the 27 member states warned that new measures would be needed to support the most vulnerable groups inside the bloc affected by the ongoing crisis to prevent disaffection toward Kyiv, people familiar with the discussion said.

EU economy commissioner Paolo Gentiloni told ministers during the closed-door meeting that national governments need to ensure that the economic response to the war’s fallout is strong enough to avoid the risk of fatigue among Europeans, an EU official said. Gentiloni told reporters on Thursday that governments have a “duty” to mitigate the impact of higher prices, in particular of the energy bills, on the poor.

The ministers on Tuesday managed to agree only on a 1 billion euro loan for Ukraine as a first tranche of the larger macrofinancial assistance package. The bulk of the financial package, which was approved in principle by EU leaders in May, has been blocked for weeks over differences between the commission and Germany on how to structure the funding.

The impasse is unlikely to be solved before Brussels scatters for the summer break, according to people familiar with the state of the discussions. All 27 member states must give their blessing to the terms of the aid package.

Germany first tried to convince the commission to provide grants rather than loans to ease Ukraine’s debt burden. Berlin then bargained with the EU executive’s arm over the terms of the loans.

German Finance Minister Christian Lindner told reporters in Berlin earlier this month that “Germany should not be called upon twice.” Lindner added that “everyone should be called upon to the extent of his or her ability.”

Separately, a 1.5 billion euro loan provided by the European Investment Bank to Kyiv also remains blocked inside the EU machinery since the commission is calling for a higher volume of guarantees compared with the standard operations of the bank. A commission official said the EU needs to make sure that it can absorb losses in the event of a Ukrainian default.

Europe’s economic clouds could make the debate even more difficult in the coming months. The costs of the energy transition, measures to cushion rising prices, military spending needs and support for Ukraine are all competing for resources from depleted national financial buffers, warned one EU diplomat.

The situation could turn more dire if Russia turns off the taps of the gas flows to Europe. “This risk has become more than just a hypothetical scenario for which we need to prepare,” Gentiloni said. “So a storm is possible. But we are not there at the moment.”