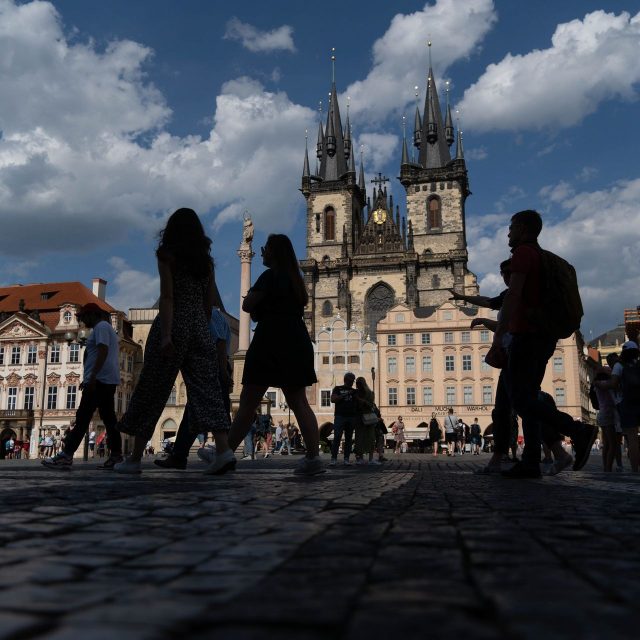 Inflation and recession will stress popular support for a hard line against Russian aggression.

There’s a common refrain among Eastern European politicians. Ukrainian resistance, they say, is all that stands between their countries and Russian military aggression. Yet the effects of Vladimir Putin’s war have already been felt, first in a refugee crisis, and now in economic fallout that poses a major threat to regional unity.

Year-on-year inflation in the Czech Republic hit 16% in May, and economists say only rapid interest-rate hikes facilitated by the country’s independent currency stopped it from climbing higher still. Consensus is growing that the country is heading for recession next year. “The probability is currently around 60%,” says economist Lukáš Kovanda. Elsewhere the outlook is worse. In the Baltic states, which have so far led the European charge in supplying Ukraine with financial and military aid, inflation is in the neighborhood of 20%.

Supply-chain disruptions and energy price hikes have caused industrial output to slump. Yearly production declines of 9.4% in Slovakia and 3.8% in the Czech Republic were reported in April, and data for May will likely show sharper contractions. In another sign of straitened times, development projects large and small have been left in the doldrums by spiking construction costs.downturn is becoming noticeable in everyday life. Gasoline prices and energy bills are hitting all-time highs, and food prices are soaring. In non-eurozone countries such as the Czech Republic and Poland, rapid interest-rate hikes are suddenly pricing many out of the mortgage market.

As the war in Ukraine continues, these accumulating economic woes are becoming a stress test for Western unity against Russian aggression. It’s one thing for Eastern Europeans to hang blue-and-yellow flags on city streets. It’s another matter to ask them to shoulder long-term financial costs for Ukraine’s sake. And inflation fears aren’t limited to Eastern Europe. The European Council of Foreign Relations recently found that 61% of poll respondents from across the Continent identified “cost of living and energy prices” as their “biggest concerns in regards to the war in Ukraine.”

Ironically, the potential public backlash caused by the economic downturn poses a direct threat to the Ukrainian cause. Sacrifices for Kyiv played well amid Ukraine’s early triumphs, but as the fighting goes on, support for an all-out victory on moral grounds is starting to look like a political lead weight in some European capitals.

A Czech opinion poll released earlier this month suggests the start of a swing away from the pro-European Union ruling coalition as tough economic circumstances bite. Prime Minister Petr Fiala has tried to pin blame for rising inflation on his predecessor’s profligacy during the pandemic. Even at the zenith of popular support for Ukraine in March, Czechs were far less hawkish than their government, with 79% believing Ukraine had by that time already been given sufficient support.

Reflecting these currents, the leader of the more geopolitically ambivalent opposition Andrej Babiš has begun advocating a hands-off approach to the crisis, suggesting that the Czech Republic has already done what it can for Ukraine. “I do not think we should continue to supply weapons. We supplied weapons and we stopped Putin,” he said, “and our own army is not in a very good condition either.”

As calls to reduce support for Ukraine grow stronger, the political situation is even more precarious in neighboring Slovakia, where a fragile coalition government is teetering on the brink of collapse over Russia sanctions and an anti-inflation aid package. Bitter disputes over a special tax on Russian oil as well as other economic measures have led to a complete breakdown in cooperation, with ministers calling each other “cheats” and “liars.”

A government split would provide an opening for an opposition appeal to the third of Slovaks who blame the West for allegedly provoking Russia into war with Ukraine. Former Prime Minister Robert Fico has claimed that sanctions on Russian oil will “practically destroy” Slovakia’s largest oil refiner after the government “gave in to the interests of the USA.”

Ill omens for the survival of pro-Western coalitions are emerging elsewhere in Eastern Europe too. The Estonian coalition collapsed after Prime Minister Kaja Kallas accused her colleagues of “working against Estonia’s core values,” while Bulgaria’s pro-EU government is disintegrating after a budget dispute led to the withdrawal of a coalition partner.

As dark economic clouds gather, a region that quickly became a bastion of pro-Ukrainian unity now threatens to transform into a cauldron of political strife. If pro-Western, pro-Ukrainian governments can’t weather the coming storm, geopolitical allegiances in Eastern Europe could soon start to swing.

Mr. Nattrass is a British journalist and commentator based in Prague