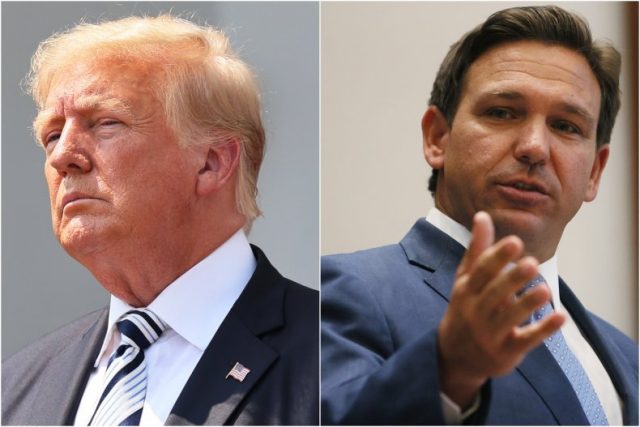 Florida Gov. Ron DeSantis (R) is carefully cultivating a national network of support amid speculation of a 2024 presidential bid, even as he continues to downplay any notion that he has political ambitions beyond his home state.

The rising Republican star has amassed more than $100 million for his reelection campaign, a sum more on par with that of top-tier presidential contenders than a candidate for governor. He’s met with donors in South Carolina, stumped for Republican Senate candidate Adam Laxalt in Nevada and attended fundraisers in several states.

But DeSantis has also been careful to avoid many of the moves typical of someone weighing a run for the White House. Unlike other prospective candidates like former Ambassador Nikki Haley or Sen. Tom Cotton (R-Ark.), DeSantis hasn’t yet traveled to early primary and caucus states such as New Hampshire or Iowa, nor has he weighed in extensively on midterm campaigns outside of his home state.

Multiple Republican strategists and operatives described DeSantis’s strategy as both brash and calculated, noting that he appears intent on cultivating his reputation among conservatives nationally while being careful to avoid any move that could put him directly in former President Trump’s crosshairs.

“It’s like everything else in Republican politics in this country. It all comes down to how you deal with Trump,” Keith Naughton, a veteran Republican strategist, said. “If he was out campaigning, then Trump has more of a license to attack him and to really knock him down directly.

“As long as DeSantis is just running for reelection and doing this passive-aggressive 2024 campaign — because he is running — Trump has a hard time going after him.”

Despite Trump’s preeminence among Republicans — he has repeatedly claimed that he would easily beat DeSantis in a 2024 primary match-up — there are signs that DeSantis could actually challenge that status.

A University of New Hampshire poll released this week showed him pulling ahead of Trump among likely GOP primary voters in the first-in-the-nation primary state. He also topped Trump in the Western Conservative Summit’s 2024 straw poll earlier this month, marking the second year in a row that he finished in the top spot.

Andrew Smith, the director of the University of New Hampshire Survey Center, said that Trump’s slide in the Granite State Poll is “part of a typical pattern.” While he remains perhaps the best-known figure in the Republican Party, voters often begin to look at other potential contenders as the presidential primaries draw nearer.

With DeSantis regularly grabbing headlines, that pattern appears to be playing out in his favor.

“A party’s losing candidate in the prior election is typically the best-known person in their party,” he said. “As the primary gets closer, new candidates emerge and attract more media attention, and therefore more voter attention, than the losing candidate from the previous election.”

DeSantis has brushed off questions about his future political ambitions. In an interview on Fox News earlier this month, DeSantis said that it would be “futile” to keep asking him about a potential White House bid. Asked if he would still run for president if Trump mounts another campaign, DeSantis didn’t offer up any ground.

For now, DeSantis maintains that his primary focus is winning reelection this year, though with his massive fundraising and a largely positive job approval rating he appears well on his way to a second term in the governor’s mansion. He’s booked some $2.4 million in ad reservations through November, with the first spot set to debut next month.

But for a governor seeking reelection, DeSantis’s public schedule can look unusual at times.

He’s raised money in states like Wisconsin and California, attended Nebraska’s annual Steak Fry — a conservative gathering hosted by Gov. Pete Ricketts — alongside other prospective presidential candidates and has spent more time attacking President Biden than either of the top Democrats challenging him for the governor’s mansion this year.

Trump has reportedly griped privately about DeSantis’s growing national clout, though both he and DeSantis have denied rumors that their relationship has grown rocky.

But in one notable change from the past, Politico reported last week that the Florida governor has no plans to seek Trump’s endorsement ahead of the November election.

One Republican donor who has given to both Trump and DeSantis said that the Florida governor had built up his own brand enough to forgo a Trump endorsement, calling it a “calculated decision.”

“He’s smart enough to know that if he gets too close to him, if he asks for the endorsement, he’s going to get sucked into all of Trump’s nonsense and all the demands,” said the donor, who requested anonymity to speak candidly about the matter.

A former Trump aide said Trump would almost certainly endorse DeSantis if he sought it out, but added that “it would come with some strings attached.”

“I think he still wants to hear that DeSantis won’t run if he does,” the aide said. “I don’t know if that’s part of it, but I think DeSantis has the right idea. He’s got enough of a reputation now to where the endorsement just doesn’t matter as much.”

In 2018, when DeSantis first sought the governor’s mansion, Trump’s endorsement helped him overcome what once appeared to be a longshot primary campaign against former state Agriculture Commissioner Adam Putnam.

Since then, however, DeSantis has transformed himself into a political heavyweight in his own right.

He earned praise from conservatives for his laissez-faire approach to the COVID-19 pandemic, as well as for his efforts to crack down on alleged censorship by social media companies. He has also emerged as a leading Republican voice against the teaching of critical race theory in schools and has built a reputation as an opponent of what conservatives dub “woke” culture.

Naughton, the GOP strategist who is also an opinion contributor for The Hill, said that DeSantis’s focus on his work as governor has already given him a leg up over most of his potential competitors in the 2024 Republican presidential primary.

Other would-be candidates — former Vice President Mike Pence, former Secretary of State Mike Pompeo or Haley, among others — are either not currently serving in public office or are relegated to the minority in the Senate, Naughton said. DeSantis, by contrast, has a built-in megaphone in the governorship.

“Where DeSantis is — he’s got this great voter base in Florida,” Naughton said. “He’s an elected official, he’s an executive, he’s actually doing things and he’s kind of captured Republican imagination.”