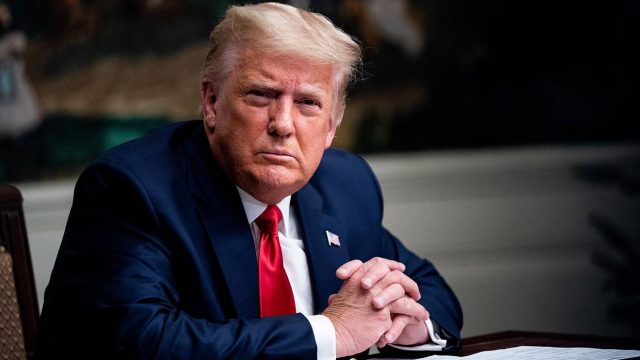 DALLAS — Former President Trump’s place atop the conservative movement was reiterated over the weekend at the Conservative Political Action Conference (CPAC) in Dallas, Texas, and the event’s organizers believe it will stay that way until he “takes his last breath.”

Trump convincingly won the 2024 GOP presidential nomination straw poll taken at CPAC, and the former president also prevailed when Fox News Digital asked attendees in the hallways of the event. Florida Gov. Ron DeSantis came in second on the 2024 presidential nomination question, at 24%, and is widely considered the clear next-in-line among many die-hard Trump supporters. Others simply prefer DeSantis these days.

American Conservative Union chairman Matt Schlapp, who didn’t want to “vote in a primary” so far away from the 2024 election when asked who he prefers, believes many conservatives treat Trump like an incumbent president and his popularity is unrivaled.

“He comes into this race as the incumbent, so in most situations when you’re the incumbent you’re going to have the lion’s share of support of everyone,” Schlapp told Fox News Digital backstage at CPAC Texas.

“There is this other piece which Donald Trump shares uniquely in American politics on the conservative side, and that is because he was so authentic about what he said he would do and then what he did do… this bond formed between the conservative movement and Donald Trump where he didn’t just say he was going to move the embassy, he moved it,” Schlapp continued. “He didn’t just say he was going to pick the next generation of Clarence Thomas, he picked three of them. He just went right down the line and did what he said he was going to do.”

Many CPAC attendees wore Trump merchandise, and the event’s vendors offered just about anything a MAGA enthusiast could ever hope for. There were occasional “Make America Florida” hats and shirts in honor of DeSantis, but it was a far cry from the years-ago CPAC events when attendees wore gear to support their favorite Republican with a large variety of choices. These days it’s almost all about Trump.

Schlapp cited the border, willingness to “take on” China and the economy as other key reasons conservative still largely adore Trump. In addition, Schlapp also believes that minority voters will support Trump if he decides to run again because their bank accounts are suffering under President Biden.

“He rekindled this idea that the Republican Party is the place of opportunity for people of color, and because of that it’s an unshakable bond,” he said. “How many CPACs in a row where straw polls that we had demonstrate that? But, yet… it’s almost like people are confused. They ask the question, ‘Is he the leader in support from these folks?’ It’s like, yes! And I think he will be until he takes his last breath because of everything he did.”

Trump, who’s repeatedly teased making another presidential run in 2024 to try and return to the White House, captured 69% of ballots cast in the anonymous online straw poll, according to results announced by CPAC on Saturday. Mercedes Schlapp, Matt’s wife who plays a key role at CPAC and served as White House senior communications director, added that she believes most Republican presidential hopefuls are waiting to see what Trump decides.

“Even DeSantis, they’re watching to see what Donald Trump is going to do, I think that is a very important factor to consider,” she said.

While the Schlapps clearly believe Trump is the leader of the modern conservative movement, they don’t think the bar is particularly high when it comes to what it would take to defeat President Biden in a general election.

“It was the media that told us Joe Biden was up to the job, they were clearly covering for him. He doesn’t really do the job, and now the assumption he’s going to be the nominee. I think the chances of Joe Biden being alive, or really even being able to do anything to kind of act like he’s the president are almost zero,” Matt Schlapp said, noting that the Democratic Party doesn’t exactly have a deep bench.

“Then their real question is, do they pick Kamala Harris who has poll numbers more toxic than cancer, or do they get Nancy Pelosi, which I don’t think is going to work out so well,” he continued. “They are vacant of a lot of talent, so excuse me, I’ll probably be a little optimistic on our chances in 2024.”

Mercedes joked that her husband isn’t always an optimistic guy but “the mere fact that the Democrats don’t have a deep bench” offers a clear reason to be hopeful as many prominent Democrats haven’t committed to supporting Biden in 2024.

“I think it shows a massive divide within the Democratic Party,” Mercedes said. “I think the Republican Party is probably even more united right now than it’s ever been because the goal is to defeat Joe Biden, defeat Nancy Pelosi, knowing that there is an urgency right now to save this country.”

Fox News’ Joseph A. Wulfsohn and Paul Steinhauser contributed to this report.