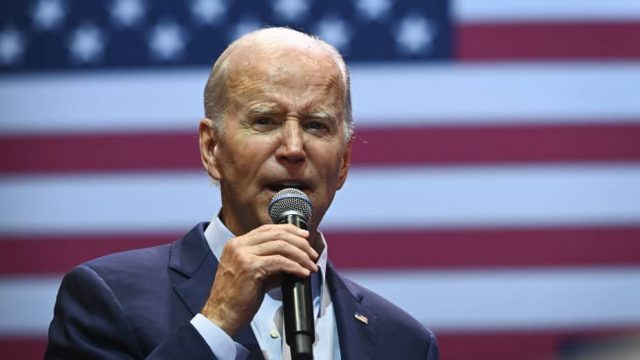 Anxiety over the cost of living and the direction of the economy could prove costly to President Joe Biden and his fellow Democrats in Tuesday’s election.

Recent surveys show consumer sentiment has risen only modestly and remains well below where it was a year ago, when inflation worries first began to grip policymakers, shoppers and business executives.

A report released Friday outlined the problem for Washington’s current ruling party. The University of Michigan, which releases a closely watched sentiment survey each month, asked respondents who they trusted more when it came to the economy and which would better for personal finances.

The survey of 1,201 respondents saw Republicans with a 37%-21% edge on the question of which party is better for the economy. While that left a wide swath — 37% — of consumers who don’t think it makes a difference, the disparity of those with a preference is huge. (The survey did not distinguish whether respondents were likely voters.)

Which political party is better at handling the national economy and issues of personal finance?

In fact, among all demographics, the only one in the Democrats’ favor was the sole party group. Whether it was age, household income or education, all other groups favored the GOP.

On overall sentiment, the Michigan survey saw a reading of 59.9 for October, 2.2% better than September but 16.5% below the same period a year ago. The reading is just off its all-time low in June 2022 and is running close to its lowest level in more than 11 years, according to data that goes back to 1978.

“It’s a huge problem” for Democrats, said Greg Valliere, chief U.S. policy strategist at AGF Investments, who specializes on the impact of politics on the financial markets. “They’ve seen enough evidence since Labor Day showing how the economy dwarfs every other issue, but they didn’t do anything about it. They didn’t say the right thing, they didn’t show enough empathy. To me, this was a really sorry performance.”

Valliere thinks the issue could get so large that Biden may have to announce soon that he will not seek a second term in 2024.

“I think the Democrats have a lot of problems right now,” he added.

Consumer confidence also hit an all-time low on housing, with just 16% of respondents saying they think now is a good time to buy, according to a Fannie Mae survey that goes back to 2011.

Those types of readings have not boded well for the party in power.

Former President Donald Trump lost his bid for reelection in 2020 when the Michigan poll was just above its early Coronavirus pandemic low. Conversely, Barack Obama won reelection in 2012 when the survey was riding a five-year high. George W. Bush captured his bid for a second term in 2004 when sentiment was middling, but Bill Clinton triumphed in 1996 when the Michigan gauge was at a 10-year high.

As for congressional control, in the 2010 midterm election, when the Obama-Biden administration lost a stunning 63 House seats, the biggest rout since 1948, the reading was at 71.6. That was only narrowly better than the year before when the economy was still climbing out of the financial crisis.

Today, the public is particularly anxious about inflation.

After declining for two months in a row, October’s one-year inflation outlook stood at 5%, up 0.3 percentage point from September and the highest reading since July. The five-year outlook also rose, up to 2.9%, and tied for the highest level since June.

The University of Michigan survey also found respondents had more trust in Republicans when it came to the fate of their personal finances.

The GOP held a 15-point lead against Democrats in that category, including a 19-point edge among independents.

The survey showed expectations running high that Republicans will prevail in Tuesday’s election and wrest control of Congress back from Democrats.

Which political party will control Congress after the 2022 midterms?