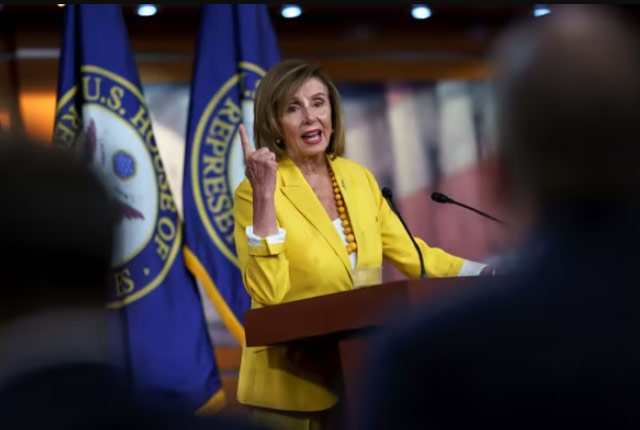 China has issued stark private warnings to the Biden administration about the upcoming trip to Taiwan by Nancy Pelosi, Speaker of the US House of Representatives, triggering alarm bells among White House officials who oppose her visit.

Six people familiar with the Chinese warnings said they were significantly stronger than the threats that Beijing has made in the past when it was unhappy with US actions or policy on Taiwan.

China has publicly threatened “strong measures” if Pelosi proceeds with the planned visit in August. But one person said China had expressed “stronger opposition” to the US in private than before. Several other people familiar with the situation said the private rhetoric went even further by suggesting a possible military response.

Beijing has not been explicit about its potential reaction. Its military could try to block Pelosi from landing in Taiwan or take other actions to impede her visit, such as using fighter jets to intercept her US military aircraft.

Several people said the White House was trying to assess whether China was making serious threats or engaging in brinkmanship in an attempt to pressure Pelosi to abandon her trip.

US national security adviser Jake Sullivan and other senior National Security Council officials oppose the trip because of the risk of escalating tension across the Taiwan Strait, according to two people familiar with the debate.

The NSC declined to comment on whether the administration had urged Pelosi to cancel her trip. John Kirby, NSC head of strategic communications, said on Friday that the NSC team provided “context, facts and geopolitical relevant information” and that the Speaker made her own decisions.

The controversy over the trip has sparked concern among Washington’s allies who are worried that it could trigger a crisis between the US and China, according to several of the people with knowledge of the situation.

In another illustration of the heightened concern, US ambassador to China Nick Burns abruptly cut short a visit to Washington this week and returned to Beijing, partly because of the mounting worries about Taiwan and also to prepare for an upcoming phone call between President Joe Biden and his Chinese counterpart Xi Jinping. The state department declined to comment.

Biden this week said he expected to speak to Xi by the end of the month. The leaders are expected to discuss Taiwan, which has emerged as a serious flashpoint.

China has flown an increasing number of warplanes into Taiwan’s “air defence identification zone” since Biden came to office. In May, Biden said the US would intervene militarily to defend Taiwan from any Chinese attack.

The controversy about Pelosi’s trip erupted after the Financial Times revealed that she planned to visit Taiwan to show support. The island counrty has come under rising pressure from China in the context of Russia’s invasion of Ukraine, which has elevated fears of Chinese military action. Pelosi and her delegation will also visit Japan, Singapore, Indonesia and Malaysia.

The timing of the visit is sensitive for China, cming in the same month as the August 1 anniversary of the founding of the People’s Liberation Army. It may also coincide with the Communist party leadership’s annual conclave in the coastal resort of Beidaihe, where cadres discuss policy but also sometimes tackle power struggles.

The conclave is even more important this year as Xi will have to lay the ground for securing an unprecedented third term as party head at the Chinese Communist party’s 20th Congress in November.

Since the US normalised relations with China and switched diplomatic recognition from Taipei to Beijing in 1979, it has maintained a “one China” policy under which it recognises Beijing as the sole government of China while only acknowledging Beijing’s position that Taiwan is part of China.

Beijing has accused Biden of diluting that policy by taking steps such as sending a high-profile delegation of former US officials to Taipei this year.

Pelosi would be the most senior US politician to visit Taiwan since then-Republican Speaker Newt Gingrich travelled to Taipei in 1997. Beijing is opposed to any moves that appear to confer legitimacy on Taiwan as an independent country or make the US relationship more formal.

Some experts said China erroneously believed the White House was co-ordinating the visit because Pelosi and Biden belong to the same party, even though Congress is independent and Biden has no power to block her travel plans.

The Pentagon this week briefed Pelosi on the scenarios that could occur if she travelled to Taipei. Following that briefing, Biden told reporters that “the military thinks it’s not a good idea right now” for Pelosi to proceed. But US officials have said that the military simply outlined the various risks attached to such a visit.

At a news conference the following day, Pelosi said Biden had not raised any concern about the trip, which she refused to confirm. However, she indirectly referred to it by saying that Biden appeared to be pointing to some of the scenarios that could occur if she visited Taiwan.

“I think what the president was saying is [that] maybe the military was afraid our plane would get shot down or something like that by the Chinese,” she said. “I’ve heard it anecdotally, but I haven’t heard it from the president.”

Pelosi’s office did not respond to a request for comment about whether she might abandon her trip.

People briefed on national security affairs in Taipei said the risk that Beijing might markedly step up military aggression in response to Pelosi’s visit was more pronounced than last year given the rising tension.

“Previously the gangster was wearing a suit, but now he is directly taking the knife out,” said a senior Taiwanese official.