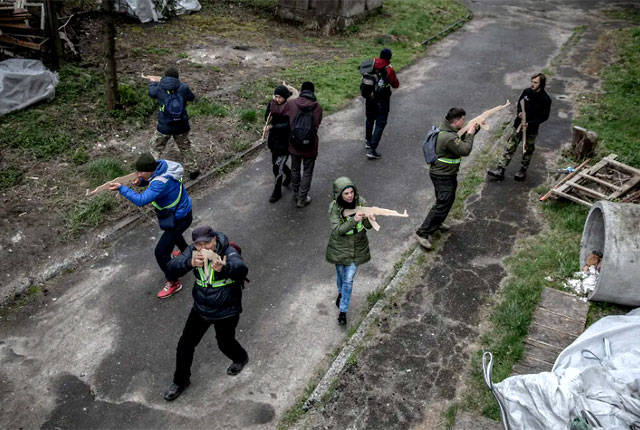 Recruiters approach young men on the street, but the standards are not always clear and there are reports of unwilling men being signed up while some eager to fight are turned away.

By Jane Arraf and Oleksandr Chubko

KHARKIV, Ukraine — At a subway station, a recruiting officer named Oleksandr, one of dozens deployed to different spots around Kharkiv, pulled young men out of the crowd recently, checking documents and determining whether they were eligible for military service.

A nationwide campaign is underway in Ukraine to recruit, register and draft men — a predictable response for a country at war. That campaign includes fanning out on the streets to find potential soldiers and issuing summonses ordering them to report to recruiting offices.

But the effort, especially the street recruiting, is drawing accusations that it is secretive and arbitrary, that it violates the government’s own rules and that it sometimes drafts the unwilling while spurning the willing. It has also led to a cat-and-mouse game between recruiters and men trying to avoid them.

Recruiters like Oleksandr, who did not give his full name because he was not authorized to speak to the media, say they issue summonses to register only to those who want to fight. “We ask them, do they have military training and do they want to serve in the war?” he said.

But some of those on the receiving end say they were never given a choice about appearing, while there are reports of men who are eager to fight being turned away, for reasons that appear bureaucratic in nature.

A petition signed by more than 25,000 Ukrainians, the threshold for requiring President Volodymyr Zelensky to respond, requests a ban on issuing summonses at checkpoints, gas stations and other public places. It asks him to establish a transparent process for when people might be called up.

“There are many willing people who are motivated, who have combat experience, but cannot join the service, because in many places they recruited people precisely on the streets who do not have experience,” the petition read.

Denis, 29, said he was recently handed a summons he did not want outside a Kharkiv supermarket. But at the recruitment office, “I lied and said I didn’t have any military training,” he recalled — a lie that may not be caught because his records are in a different part of Ukraine. Denis, who did not want his last name to be published for fear of punishment, added, “I know guys who don’t even leave their apartments because they’re afraid to get a summons, but I also know a lot of people who want to fight.”

Ukraine has long had conscription, and young men are required to do military service unless they fall into an exempt category, like being enrolled in a university, having a disability or having at least three children. After the war began, all nonexempt men ages 18 to 60 were required to register with their local recruitment offices and undergo medical screening for possible service, but at times enforcement and record-keeping have been haphazard.

Government officials say that only those with military experience or specifically needed skills have been drafted so far, but that others are likely to be called up as the war continues. Critics say that conscription has not been as selective as officials make it out to be, and that with the military in charge of recruitment, registration and drafting, the process is shrouded in secrecy, with little transparency about the standards applied to each step.

“This process of handing out summonses fully complies with the law,” said Yevheniia Riabeka, former legal adviser to the commander in chief of the Armed Forces of Ukraine. “This is a normal attempt to register citizens who are obligated to defend their country.”

Each local recruitment center is given targets for numbers of people to register, she said — but those figures are “completely secret information.”

Andrii Novak, a lawyer who represents people trying to be excused from service, drew a distinction between a summons sent by a recruitment office because its records showed that a person should register and one filled out by a recruiter who stopped someone on the street. He said his firm, Miller Law Firm, considers the latter illegal.

In Kharkiv, Ukraine’s second-largest city by population, a channel on the messaging app Telegram provides anonymous, crowdsourced, real-time information on the locations of recruiters for people trying to steer clear of them. It has more than 67,000 subscribers.

“Our goal is to prevent the inappropriate issuance of summonses,” reads the channel description. It invites residents to send in locations and photos of police officers and recruiters.

One post featured a picture, taken from inside a parked car, of recruiters in front of a shop. The caption read, “It’s our old friends.”

Another Telegram channel for the Lviv region in Western Ukraine reads: “It is important to get all the relevant information. Only by knowing your rights, you can protect yourself and your family!” The channel lists the five places where the most summonses are handed out and the diseases that keep men from serving. It also explains how to refuse a summons.

Ukrainians have shown remarkable solidarity, with hundreds of thousands volunteering for the regular army, for the Territorial Defense Forces — akin to the National Guard, with some units deployed in combat — or to work in civilian defense activities. But the numbers have not been enough to match the Russians’ battlefield strength — or to keep up with casualties, which officials have said peaked this spring at 100 killed and almost 400 wounded daily.

There are also signs, five grueling months into the war, that the sense of unity is fraying at the edges. Soldiers, including minimally prepared raw recruits, have done long, hard service, while others have managed to stay far from it.

Volodymyr Marchenko, 48, a farmer, has served five months in a Territorial Defense battalion, often at or near the front lines, without his unit being relieved. He knew how to shoot a hunting rifle and enlisted immediately when the invasion began.

Sent to fight in street clothes and ordinary shoes, he sustained frostbite on his toes.

“There is no one to replace us,” he said. “There are too few people. It’s very hard for the guys psychologically.”

There is also disillusionment with a system that turns away some who want to fight, while taking in others who are unwilling and unqualified.

“There are a lot of guys who have a lot of motivation and ability, who want to join the army now, but they don’t take them,” said a senior soldier in a Territorial Defense unit, who requested anonymity to speak candidly.

The lack of public transparency about the recruitment system, a major complaint of its critics, makes it difficult to tell how and why people are recruited. For the most part, though, bureaucratic or logistical factors — such as some units’ lacking available slots for officers or soldiers — seem to be behind why some with relevant skills or experience are not accepted for service.

On the opposite side, some commanders and senior soldiers say summoning men unwilling to serve is lowering morale among those who volunteered.

Last month, the Kyiv police chief, Ivan Vyhivskyi, said that police and military commissars raided two nightclubs that were violating curfew and issued 219 summonses for military registration to men they found there.

That drew a sharp response from a senior sergeant of the 47th Armed Forces Battalion in a Facebook post this month.

“I am proud of my military service and I am outraged that my profession is being reduced to the level of punishment for these scumbags,” wrote the sergeant, Valeriy Markus. “It’s humiliating.”

He wrote that soldiers and officers who put their lives on the line were demoralized by a chaotic recruitment process that drew draftees with poor qualifications or little inclination to serve. Sergeant Markus said he had personally faced situations where draftees’ alcoholism or other problems endangered other soldiers’ lives.

“It is impossible to get rid of them, or use force — they will sue,” he wrote.

Sergeant Markus, identified in a Ukrainian defense industry posting as part of the leadership of the 47th Battalion, declined to be interviewed.

In Kharkiv, only 25 miles from the Russian border, Oleksandr, the recruitment officer, said he was looking for unregistered men with military training. If they say they are not interested, he lets them go, he said.

Some, he recalled, shouted at him. “They say: ‘I don’t want to serve! Ukraine isn’t even a real country!’” He attributed a small thread of pro-Russian feeling in this region, bordering Russia, to what he called mental health problems from the frequent shelling the city has endured.

Oleksandr said that after the Kharkiv recruitment office was leveled by Russian airstrikes early in the war, military recruiters there no longer had records of who had registered and needed to recreate their database.

Mr. Zelensky has said he wants to field one million men in the military effort. That figure is reported to be at about 700,000, including Territorial Defense fighters, some of whom have been deployed to combat.

Millions of Ukrainians, displaced from the war-torn eastern and southern regions, are living in Western Ukraine, close to the Polish border, including many military-age men who have not signed up.

Last month the military chief of staff caused an uproar by issuing instructions indicating that military-age men needed to register when moving between provinces. After criticism from Mr. Zelensky that the military could not make such a move unilaterally, it clarified that it was simply asking citizens to inform the authorities if they were moving to a different region.

“Dear citizens,” read the notice. “I remind you, the war is going on. Your country needs you!”